The Reptile Report - How often are we aware of being part of an actual historical event? It’s my sincere belief that anyone who attended the first annual Texas Rattlesnake Festival was, indeed, a part of something bigger than they may have realized. And that great group of folks wearing STAFF shirts should be proud of having made a bit of history happen.

Our country is supposed to be “enlightened” and “civilized”. And, for the most part, I believe we’ve come a very long way toward those worthy goals. But for all that, there are still parts of our country that believe it is not only OK to torture and slaughter animals by the thousands, but to celebrate that barbarism and teach it to their children as a way of life. We’ve grown past dog fighting and cock fighting. It’s time to grow past rounding up rattlesnakes for no other purpose than the celebration of their slow and painful deaths.

While this year’s wholesale slaughter began some 250 miles away in Sweetwater, TX, a new take on celebrating rattlesnakes began in Round Rock, just north of Austin, TX. There, children were able to see beautiful rattlesnakes up close, and touch numerous other species of harmless snakes. These children can come away with a deep appreciation for the diversity of nature and a love and respect for the roles all these animals play in it. They’ll be far more inclined to want to protect the environment we all have to live in, rather than destroy it in the name of hate for one creature that just wants to be left alone.

Andy from Urban Jungles Radio summed it up beautifully. “It’s like Monster’s Inc. The monsters got their energy from scaring kids, but then found out that laughter produced tons more energy. Places like Sweetwater could do SO much more good, and earn even more money for their projects, by focusing on the positive energy instead of the negative.”

Tim Cole loved the way the festival made it possible for professional herpers to meet and interact with the general public and share their genuine love and passion for the animals.

So how was the festival? It was great! Yes, it was a bit on the small side, but for a first-run, it was awesome. The event was well organized, beautifully laid out, clean and attractive. The schedule for special demonstrations was clear and the venue well-suited for its purpose, with room to grow in the future. And I truly believe it will grow. The potential to turn this into a weekend-long carnival is very high.

It was a ton of fun meeting and hanging out with Urban Jungle Radio’s dynamic duo, Danny and Andy. I even got Andy to flash me a little leg and show off his new tattoo commemorating this event. How is that for dedication to a cause?  (Sorry ladies, no shiny undies in these shots!)

We didn’t get to see all the demonstrations, but what we saw was fascinating.  A huge highlight of the event was seeing Jim Harrison of the Kentucky Reptile Zoo do a milking demonstration.  What an amazing guy!  He and Kristen Wiley made the job look so easy, but I’m pretty sure I’d never have the nerve to put my hands that close to any rattler’s mouth.  He milked six different western diamondbacks and then two copperheads.  Once he got going, the actual process, from removing the animal, getting it under control, extracting the venom, and then returning it to a holding cage, went very fast.  There was no drama involved.  Jim made a point of mentioning, “If things get exciting, that means I’ve done something wrong.”  But it was anything but boring!

If you’re wondering about the missing finger on Jim’s hand, that didn’t have anything to do with snake bite.  Some of his scars are from snakes, but as many are from a variety of sports and other activities outside of his herping career.

Another treat was listening to Orry Martin talk about his program, Rise Against Rattlesnake Roundups (RARR).  He was extremely well spoken and his presentation was thoughtful, respectful, factual, and pulled no punches about what really goes on inside a roundup.

When asked about what ordinary folks can do to help bring about change, he had this to say: “I’m a very optimistic guy.  I have faith in people and their hearts.  But we may never change the minds of the diehard roundup fan that grew up in that culture.  What we can change are the laws that allow it to happen.  Write to the governor and Texas Parks & Wildlife.  Stay current on RARR and join the RARR Facebook group.  The ban against gassing will be up for public comments again soon. Make sure you get in there and let your voice be heard. Wear the t-shirt and spark conversations about the animals. They’re not to be feared. We don’t have to make everyone like them. I don’t like cats, but I don’t want to go around and kill every cat I see.  Like them or not, there’s no reason for senseless slaughter.”

My pictures of Orry didn’t turn out so well, but here’s one halfway decent, and one I swiped one from UJR’s collection. If you don’t know him, he’s the one totally rockin’ the black cowboy hat.

There were numerous activities for children, including a chance to get some hands-on experience with live (harmless!) snakes.  These kids are our future and the best way to ensure long-term protection of our environment is to instill in them a love and respect for all the life around us.  This festival was a huge step in that direction.

Danny Mendez talked about how much he enjoyed the atmosphere of the event and the stark contrast between this festival and the roundup he went to last year. “It was very nice to be in a comfortable and safe environment with venomous animals so close by. And to be around so many people who truly appreciated them. The roundups are tense and stressful, but this was really nice.”

One particularly proud and stark contrast was the hand print wall. Instead of a wall covered in gory, bloody prints, the staff and visitors got together and created this amazing rainbow of support.

Imagine a wall the length of the entire conference room, covered in beautiful rainbow prints of children and adults alike, pledged to respect and protect these beautiful animals. It can happen!

“Five years!” Danny declared with confidence. “I’ll go on record right now that within five years, we’ll have these changes done. I don’t hate Sweetwater, or even the Jaycees. They raise a lot of money and the money they raise goes to some truly worthy causes. But it shouldn’t be blood money.”

Did this one event make a difference? Just on Saturday, while I was there, I know for sure there were five different people that stopped in on their way to Sweetwater to attend the roundup. They saw the signs out front and stopped by to see what was going on. After taking it all in, and seeing some of the demonstrations, all five of them said they would be cancelling their visits to Sweetwater. My eighteen year old son attended the show with me. He’s not particularly into reptiles, but wanted to come along to keep me company. He left with a genuine pain in his heart for the roundup animals and vowed to return and support the festival for as long as he lives in Texas. Those are just the few examples I’m personally aware of. I’m sure there are a lot of others who came in with one mindset and left with an entirely new paradigm.

A tremendous amount of work went into making this event the extraordinary success that it was.  I’d like to personally thank all the sponsors and hosts who invested their time, money, energy, and heart.  You are all beautiful role models to anyone who may feel powerless to make changes in our world.

Thank you all for a fabulous event that has already made a difference and will continue to do so!  I can’t wait for next year!

Author’s note: All photos are by me, except the ones with Urban Jungle Radio noted on the images and the souvenir photo with that awesome anaconda.  Click on any image to see the full-sized pic.

Read more from The Editor’s Desk

On the Web - It’s this weekend, folks!  Come out to Round Rock, Texas on April 11th and 12th for the most exciting venomous event ever.  See an incredible diversity of rattlesnakes...

Urban Jungles Radio - Join Danny and Andy as they recap the amazing Texas Rattlesnake Festival, which took place in Round Rock, Texas on March 8th & 9th. Listen in to how... 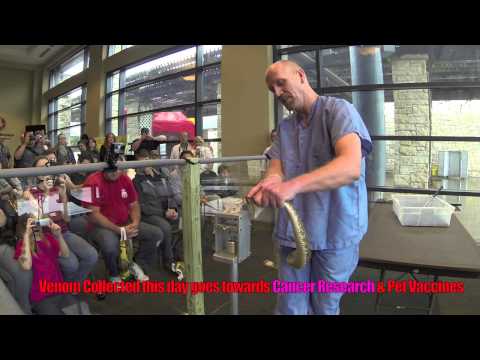 YouTube - Check out Urban Jungle Radio’s unique view of the recent festival in Round Rock, TX as Danny talks with the many great folks involved in making it a...

On the Web - It’s coming soon to Round Rock, Texas!  March 8th and 9th will bring us the inaugural Texas Rattlesnake Festival, an educational event celebrating the life and beauty of...

On the Web - Herpin’ Time Radio records a live show at the second annual Texas Rattlesnake Festival, the first and only no-kill all educational rattlesnake event in the state of Texas.